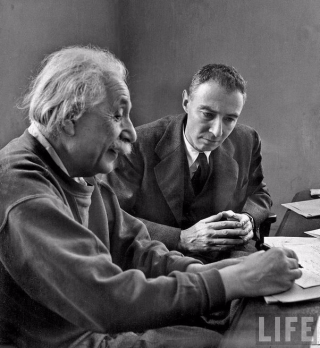 On September 1, 1939, the leading journal of physics in the United States, Physical Review, carried two remarkable papers. One was by a young professor of physics at Princeton University named John Wheeler and his mentor Niels Bohr. The other was by a young postdoctoral fellow at the University of California, Berkeley, Hartland Snyder, and his mentor, a slightly older professor of physics named J. Robert Oppenheimer.

The first paper described the mechanism of nuclear fission. Fission had been discovered nine months earlier by a team of physicists and chemists working in Berlin and Stockholm who found that bombarding uranium with neutrons could lead to a chain reaction with a startling release of energy. The basic reasons for the large release of energy in the process came from Einstein's famous equation, E = mc2, and were understood well. But a lot of questions remained: What was the general theory behind the process? Why did uranium split into two and not more fragments? Under what conditions would a uranium atom split? Would other elements also undergo fission?

Bohr and Wheeler answered many of these questions in their paper. Bohr had already come up with an enduring analogy for understanding the nucleus: that of a liquid drop that wobbles in all directions and is held together by surface tension until an external force that is violent enough tears it apart. But this is a classical view of the uranium nucleus. Niels Bohr had been a pioneer of quantum mechanics. From a quantum mechanical standpoint the uranium nucleus is both a particle and a wave represented as a wavefunction, a mathematical object whose manipulation allows us to calculate properties of the element. In their paper Wheeler and Bohr found that the uranium nucleus is almost perfectly poised on the cusp of classical and quantum mechanics, being described partly as a liquid drop and partly by a wavefunction. At twenty five pages the paper is a tour de force, and it paved the way for understanding many other features of fission that were critical to both peaceful and military uses of atomic energy.

The second paper, by Oppenheimer and Snyder, was not as long; only four pages. But these four pages were monumental in their importance because they described, for the first time in history, what we call black holes. The road to black holes had begun about ten years earlier when a young Indian physicist pondered the fate of white dwarfs on a long voyage by sea to England. At the ripe old age of nineteen, Subrahmanyan Chandrasekhar worked out that white dwarfs wouldn't be able to support themselves against gravity if their mass increased beyond a certain limit. A few years later in 1935, Chandrasekhar had a showdown with Arthur Eddington, one of the most famous astronomers in the world, who could not believe that nature could be so pathological as to permit gravitational collapse. Eddington was a previous revolutionary who had famously tested Einstein's theory of relativity and its prediction of starlight bending in 1919. By 1935 he had turned conservative.

END_OF_DOCUMENT_TOKEN_TO_BE_REPLACED