Glen Roy is a valley in the Western Scottish Highlands, just south of the Great Glen (home to Loch Ness), and draining through Glen Spean to Loch Linnhe, an inlet of the Atlantic. It is remarkable for the presence of the Roads, a series of parallel, almost horizontal, grooves in the hills on the sides of the glen. Clearly shorelines; but of what body of water? And why are there more than one of them?

Darwin thought the Roads represented vanished marine shorelines, one above the other as the result of vertical movement. Agassiz explained them, rather, as successive shorelines of a glacial lake, now vanished because the retaining glacier has melted away. If so, and if global warming is real, we might expect to see vanishing lakes today, as the glaciers retreat. We can, and we do, as my friend Peter Hess explains. Roads of Glenroy, L., from Darwin, C. R., Philosophical Transactions of the Royal Society 129: 39-81, 1839. Observations on the parallel roads of Glen Roy, and of other parts of Lochaber in Scotland, with an attempt to prove that they are of marine origin

Charles Darwin visited the Glenroy area in 1838, two years after his return from his round the world voyage on the Beagle. During that voyage, he had examined the geology as well as the plants and animals of the places he visited, and among them was the coastal area of Chile. This is marked by raised beaches inland where once had been shoreline, and Darwin correctly described these as the effects of uplift, which we now know to be driven by plate tectonics. So it was natural that Darwin should have applied a similar explanation to the Roads, suggesting that the Cairngorms, like the Andes, were a zone of uplift, and that the Roads were ancient beaches of the Atlantic, now some ten miles away. The alternative theory, that they represented shorelines of an ancient lake, ran up against a seemingly conclusive objection; such a lake could only have formed if there had been a barrier across the valley, but there was no trace of this.

Only a year later, the Swiss naturalist Louis Agassiz visited the area. He had just published his Ice Age theory, and in the Highlands he found plenty of evidence to support it; scratches on bedrock caused by the passage of glaciers, erratics (boulders far from their parent rock formations), and moraines (piles of rock rubble that had been carried by glaciers, left in place when the glacier melted). Evidence of this kind is not difficult to find throughout much of Scotland. I saw some of it myself earlier this month a few miles from Glasgow as a student on Glasgow University extension course (see illustrations below). Agassiz realised that his ice age theory also provided the correct answer to the mystery of the Roads. Yes, there had been a lake, and yes, the roads did represent the shorelines at different times, carved into the sides of the valley by fierce freeze-thaw cycles. As for the barriers holding the lake in place at different levels over the course of time, they were a series of long vanished glaciers.

We now know that Agassiz was basically correct. Indeed, we can trace a whole series of glaciations, not just a single Ice Age. And Darwin was right in thinking that the area has experienced uplift; it could not fail to do so as the weight of ice above it melted away. 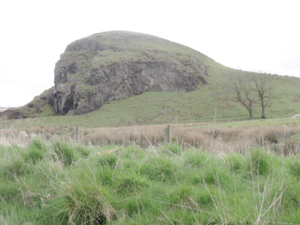 Right: A glacier-sculpted landscape. The hard basalt of Dunglass Crag, an ancient volcanic plug near Glasgow, has protected the softer rock downstream (right in photograph) from erosion. Below: Sedimentary (coarse greywacke) erratic (approx. height 1 m) on glaciated slopes around the Crag, transported from original location some 30 km to the North

Later, Darwin was to write of his paper on the Roads as his greatest blunder. He had visited Snowdonia in North Wales in 1831, as a student companion of the noted geologist Adam Sedgwick, who had been looking for fossils. In his Autobiography (p. 70) he laments how

“neither of us saw a trace of the wonderful glacial phenomena all around us; we did not notice the plainly scored rocks, the perched boulders, the lateral and terminal moraines. Yet these phenomena are so conspicuous that … a house burnt down by fire did not tell its story more plainly than did this valley.” But it took Darwin several years to reach this point, and even then he persisted for a while with hybrid explanations, in which icebergs rather than retreating glaciers had deposited at least some of the erratics.

Right: “Darwin's boulders” in Cwm Idwal, Snowdonia, North Wales. Darwin had recognise these as glacial by 1842. Click to enlarge

Agassiz rejected Darwin's concept of evolution when it was published twenty years later, but this does not seem to have diminished Darwin's respect for him. Belief in the fixity of species was, in the 1860s, understandable conservatism, even if now, 150 years later, it is no more than deliberately cultivated ignorance.

The present is key to the past. It follows that the past can increase our understanding of the present. And so it is in this case. The glaciers of Switzerland are receding. Those of the southern Andes are receding even faster. Among them is Chile's Colonia glacier, which dams a lake, Lake Cachet 2, some 3 square kilometers in area. As the glacier shrinks and weakens, it becomes progressively less able to hold back the water of the lake, which now periodically bursts through; on one recent occasion, the lake emptied itself overnight.

The overflow channel through which the vanished Loch Roy must have drained can still be detected as an abrupt narrow valley in the surrounding hillsides. The draining of Lake Cachet II sent 200,000 tonnes of water overnight down Chile's main river, and caused giant waves as far as the Pacific Ocean, 60 miles away.

Since Agassiz and Darwin examined the roads of Glen Roy, the earth's mean surface temperature has increased by roughly 1oC, with more in the pipeline even if the atmospheric CO2 concentration were to be stabilised at its present value.

Which, of course, it won't be. Global mean surface temperature change from 1880 to 2015, relative to the 1951–1980 mean. The black line is the annual mean and the red line is the 5-year running mean