Translation has its limitations

how do you say…

we stumble, severely at times The translator pretends to be Superman

disguised as a reporter for the Daily Planet

able to leap tall constructs in a single bound

across time and place

we have all sorts of advantages

we are vulnerable to the substance of our planet

Kryptonite is a cryptic message

Once free of the burden of place

odd ducks can swim in any lake or just fly away

We carry our roots on the journey

pick them up put them down

leave them behind move on

No wonder the journey gets confusing

I try to figure out what I can understand

what the other superheroes may have missed

It's not just the words that are there

the power is in-between the lines

this is where the revelation lies

“Jacob” is a meaningless word, in English

the Hebrew, “Ya’akov,” tells us he is a follower

a shadow perhaps, cast on the path toward his future self

Ya’akov fears the light of day 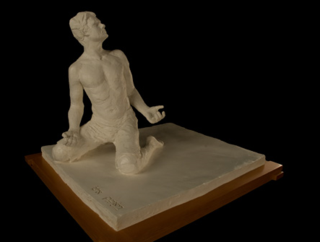 is about to hit his face

he walks West to Canaan

His shadow will disappear at high noon

in time for a duel with Esau

to prepare, he must first encounter himself

a man wrangling with him[self]2

until the dawn ascends

he sees that he cannot contend with him[self]

touches his thigh, wrenches his hip

Jacob, in his struggle with him[self]

and he says force me3 as the dawn is ascendent

and he says I will not force you

unless you bless me

and he says, what is your name

and he says Jacob

and he says no longer will your name be Jacob-Shadow, but rather Israel-Eternal Struggler

because you have struggled with the eternal

and you are able

and Jacob asks, saying, tell me your name

and he says why ask my name

and he blesses him there

because I saw the Eternal face-to-face

and my soul was saved

and the sun rises up in the east

when he transitions past Facing Eternity

and he stumbles on his hip

We all stumble at times

or on the way back

Looking for his way

Jacob gets hold of himself

grabs himself in a dream 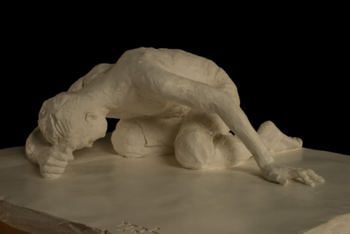 by day he leads his household

by night he wanders and wonders

Carries all their trauma

squeezing through a precarious passage

He has to imagine

a path he cannot see

darkness hovers again over the abyss

Jacob closes his eyes to rest

wishing there would be light

he imagines a new beginning

He can see his own anticipation

just a few feet beyond

Suddenly he is locked in a hold

he sees his own face looking back at him

he beholds his own stumbling block

tell me your name, he says

and he says why ask my name

For a split second

Offering a blessing to his future self

watching his former self fade into the past

he envisions the light of his reinvention

beginning in his mind’s eye

he realizes his eternal potential to become

2. There is no definitive indication in the passage that Jacob/Ya'akov is the man wrangling with himself, but neither is there any other clear indication who the man is or how he entered the scene. Most translations suggest that there is some other being there, human or Divine, actually or as a metaphor. The passage does, however, clearly indicate that Jacob is alone at night, and we know that he is a dreamer. It stands to reason, as one possible reading of this ambiguous text, that Jacob himself, the herdsman, is a lone wrangler, dreaming about his future in the form of symbols that only make sense in the unconscious light of a dream.

3. Here the verb, שלח/sh-l-kh, is the same one used in reference to Adam & Eve being forced out of the Garden, and it is the same that Moses uses to exhort Pharaoh to force the Israelite slaves out of Egypt. It seems that these are all struggles with authority, human and eternal, divine or existential. Liberation from oppression is always a challenge, always won through a struggle with a more powerful entity, never handed down on a platter, for if that were the case, there would have been no oppression, and no need for liberation.