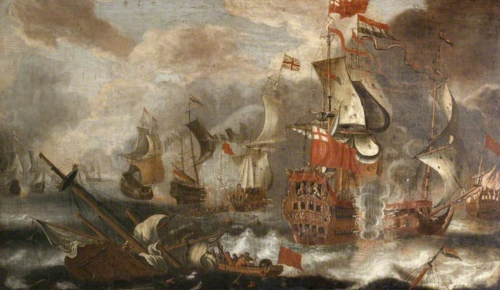 In the summer and autumn of 1665, a German expatriate in London exchanged a series of fascinating letters with a renegade Dutch Jew. The expatriate was Henry Oldenburg, who was serving as secretary of the newly-formed Royal Society of London. The Royal Society of London for the Improvement of Natural Knowledge – which, if formed today, probably would be styled far less handsomely as “RS-LINK” – was a science club of sorts. It provided gentlemen with the occasion to assemble and share their discoveries, puzzlements, and wonders – without their conversation degenerating into disputes over politics and religion. In the earliest history of the Society, Thomas Sprat described it as a respite from insanity: “Their first purpose was no more, then onely the satisfaction of breathing a freer air, and of conversing in quiet one with another, without being ingag’d in the passions, and madness of that dismal Age”.

It was Henry Oldenburg's job to chronicle the Society's discussions and discoveries and publish them in the Transactions. He served also as their PR man, promoting the Society to scientists and intellectuals across Europe. This latter service he did perform with dedication: in the year 1665 alone, he sent out 49 letters and received 66, and these numbers doubled over the following years. Curiously, the letters he received were addressed not to him, but to “Monsieur Grubendol”. More about that in a minute. 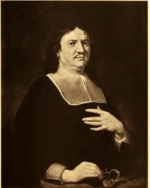 Several of the letters he sent were addressed to Benedict de Spinoza, a young Hollander who had rebelled against his Jewish community and was embarking upon an independent life of philosophical and scientific reflection. Oldenburg had met Spinoza in 1661 and evidently the two became friends on the spot. Oldenburg must have seen Spinoza as a very promising recruit in the cause of advancing experimental science: the young man was intelligent, a lover of truth, and unafraid of philosophical controversy. Spinoza, for his part, must have been flattered by the attention of this scientific ambassador who was on such close terms with the great and famous Robert Boyle. By the summer of 1665, the pair had exchanged a dozen or more letters on several matters philosophico-scientific.

Sometime over the summer or fall of 1665, Spinoza wrote to Oldenburg that, with all the unpredictable turns to be found in nature, he kept perspective by reflecting on his own state of ignorance:

For I do not think it right to laugh at nature, and far less to grieve over it, reflecting that men, like all else, are only a part of nature, and that I do not know how each part of nature harmonises with the whole, and how it coheres with other parts. And I realise that it is merely through such lack of understanding that certain features of nature – which I thus perceived only partly and in a fragmentary way, and which are not in keeping with our philosophical attitude of mind – once seemed to me vain, disordered, and absurd. But now I let everyone go his own way. 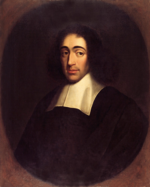 The “vain, disordered, and absurd” features of nature were not hard to find. For in 1665 Spinoza's and Oldenburg's nations were once again at war with one another. In June, in the battle of Lowestoft just off the English coast, over a hundred British warships engaged with about as many Dutch vessels and sank 17 of them. Experts then and now have found it impossible to retrace the maneuvers of the ships in the battle. One can only imagine the horrifying confusion on deck, in thick clouds of cannon fire and deadly showers of splintered wood. Three thousand men lost their lives in a matter of hours. Citizens in London stopped their work to listen to the roar of cannon. John Dryden and his friends rowed out in a boat to hear all the better.

As if war were not enough disorder, plague was sweeping across both countries in 1665. Of course, no one at the time understood its cause, or exactly how to prevent it. Perhaps we still don't understand it today, as recent research has challenged the orthodox view that the disease was caused by bacteria in the fleas carried themselves by rats. It has been suggested that a set of diverse viruses may have been responsible. Point is, we still don't know for sure.

So Spinoza had plenty of cause to find experience disordered, chaotic, and confusing. When Oldenburg pressed him to elaborate upon his view of the harmony of the universe, Spinoza replied with an intriguing comparison of human beings to a worm living in someone's bloodstream:

We see no order and have no understanding of events, whether they are the maneuvers of ships in the smoke of battle, or the political and economic forces sending those ships into battle, or the decimation of our friends and neighbors by microscopic animalcules, any more than those beasties in the blood know anything about the larger bodies they infect and kill. Like them, we are pushed and pulled by unseen and unknown forces and compelled to do what we do.

Within two years, Oldenburg was himself compelled to spend two months as a “guest” in the Tower of London. With such extensive correspondence with foreigners, and so many wars, he had taken prudent measures to avoid being charged with communicating with the enemy. This is one reason he received letters under an assumed name – “Grubendol” – which was of course just his own name nearly backwards. (Another less dramatic reason had to do with avoiding paying for postage himself.) Inevitably, Oldenburg ended up with letters containing possibly useful intelligence. These letters he either burned or copied out and sold to others. Eventually, the dangerous game he was playing caught up with him, and though he was eventually released from the Tower after a few weeks, the time he spent there understandably shook him to his core.

The events of 1665 may well cause us to reflect that the conditions of life – for so many, and in both historical and contemporary times – are impenetrable, unforgiving, and deeply tragic. But in the fall of 1665, Spinoza calmly and coldly urged his friend not to think about things this way: “It is only with respect to our imagination that things can be called beautiful, ugly, well-ordered, or confused.” Perspective is gained only by recognizing that we live in an indifferent world whose varied events exceed our meager grasp.